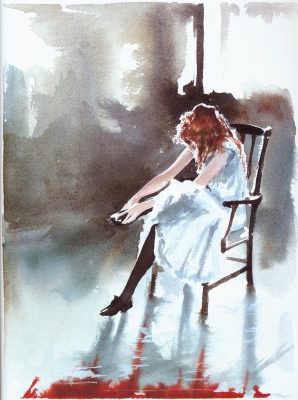 Jon J. Muth’s graphic-novel retelling of Dracula is delicate, foreboding, and ravishingly lovely – if slightly unconvincing from a narrative perspective; luckily the written narrative is almost beside the point when the art is this lovely. I ride or die for watercolors, and had to locate a copy of this out-of-print volume after seeing Muth’s watercolor illustrations for it online: sheer lavender shadows, chill expanses of castle stone, translucently pale flesh, and an overall air of elegant, sensual hush and expectancy. 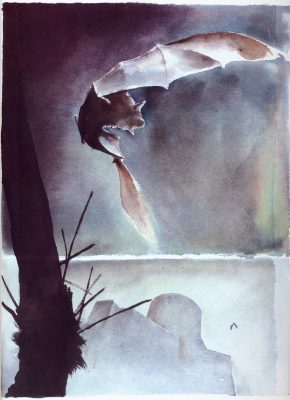 Honestly, I think it’s a shame that he decided to do the cover of the novel in oils (though I understand that watercolors often don’t hold up as dramatic cover art) since it looks that much more generic, in addition to that particular illustration aesthetically betraying the work’s 90s vintage. (There are also a couple of interior illustrations where the women have seriously 90s hair, which makes me smile, but undermines what I otherwise feel to be a timeless style.)

Narratively, this is what I’d call a slightly transposed Dracula, where characters’ identities are swapped or merged, so that ultimately the focus rests even more firmly on the experience of the female protagonists. Here, Mina is the red-headed, morbid hysteric/consumptive, while Lucy is the grave and dark one. Both are subtly at odds with the masculine society around them, here represented by a conglomeration of most of the sympathetic male cast of Dracula into a few paternal[istic] figures. With this choice, Muth removes the Bachelorette sideshow of Mina’s courtship, foregrounding instead the telos of Dracula, Lucy, and Mina. 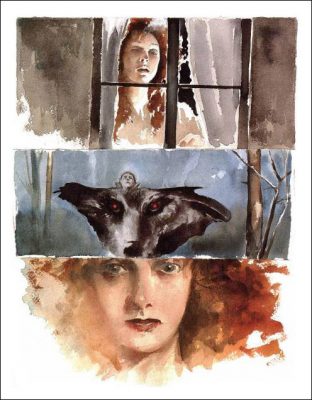 This culminates in a weird and very Gothic spiritual epiphany or metaphysical doom for Dracula, hinted at by this Schopenhauer quote used as an epigraph:

Therefore with the same necessity with which the stone falls to the earth, the hungry wolf buries its fangs in the flesh of its prey, without the possibility of the knowledge that it is itself the destroyed as well as the destroyer.

I found the conclusion a bit abrupt, baffling, and bathetic on my first read. After revisiting it, here’s one possible reading: Dracula is the id, powerful yet mindlessly enslaved by desire and consumption; Lucy embodies a superconsciousness, both sympathetic to (and seduced by) Dracula, and yet capable of perceiving the essential emptiness of his existence; she acts accordingly.

My initial confusion about this conclusion brings us back to the problem of the narrative: Muth’s script has some convincing passages of Gothic fervor, but overall could really have used stronger editing. There’s a lot of mediocre writing, including some very jarring dialogue (distractingly badly rendered Yorkshire??? dialect; an upper-class doctor exclaiming, “Like a man possessed, he’s pullin’ those damn crates outta the water”) and run-of-the-mill grammatical issues. It was enough to make the text register as a slight detraction to me, which works out fine since, after all, I bought the book for those delicious, shimmering watercolors. 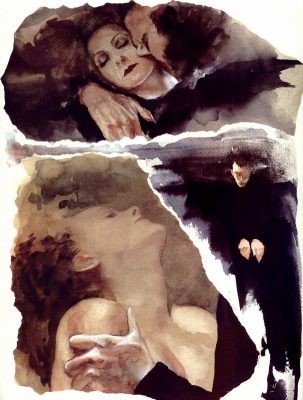