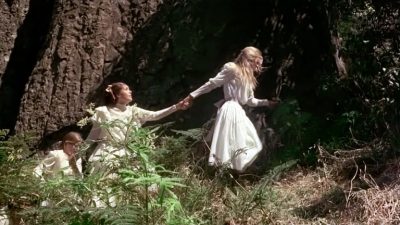 Altogther, I sum this up as a Gothic novel of middling-high quality; I class it with Rebecca in being notably entertaining and occasionally terrifying, but ultimately lacking, for me, in deeper resonance. It feels sensational more often than sublime. (The Shirley Jackson comparison on the cover copy is unearned, for example.) But it is remarkable in its flagrant queerness and unique in its Australianness; I can only imagine the singular thrill that it would be to read this response to the uncanniness of the Bush as an Australian.

The point about Australianness brings me, however, to my biggest question about the book, the meta Hanging Rock lurking beyond Lindsay’s Hanging Rock: how is this book SO GODDAMN WHITE? (Short answer: colonialism and racism…) It is so white that it feels like a kind of stunt, a master class in evasion. A single black/Aboriginal character is mentioned—the tracker brought in to try to find the girls—and the bloodhound that he handles ultimately receives more description than he does. Which is none: there are simply three mentions of “a black tracker” or “the abo tracker.”

The absence of Aboriginal people and beliefs feels like the book’s greatest haunting. Lindsay makes a point of describing how the characters are cut off from a relationship with the landscape by their elaborate clothing and manicured lifestyles, and the Australian characters wink to one another at the Bush-naïveté of recent English arrivals. And yet there’s no acknowledgement of the existence of another relationship with that same land. Anglo subjectivity is the only subjectivity. When Marion distresses squeamish Edith with natural-history factoids as they begin their climb of the Hanging Rock, Edith becomes distressed by the Rock as a geological entity, an entity in deep time. It is unknowable, unplumbable, resistant to interpretation. This is, indeed, a rich and timeless source of horror. Yet it’s baffling, at best, that there isn’t even a snippet of Marion teasing Edith with suggestions of Aboriginal spirits.

Aboriginals (and their spirits) are invisible to the characters of Picnic because they were forcibly removed from that land—and presumably because they were invisible to Lindsay, even in 1967. I’m grimly satisfied to see that that there’s a campaign that calls for the Picnic-fueled touristry of the Hanging Rock to stop its exclusive focus on fictional “white vanishings.” In dismissal of Michael Fitzhubert’s lost darling, the campaign is called Miranda Must Go.