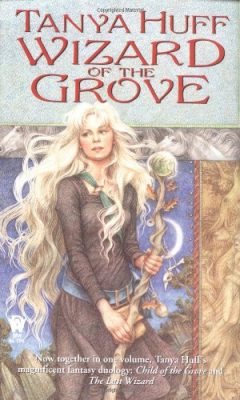 Wizard of the Grove is an omnibus reedition of Tanya Huff’s 1988/1989 romantic high fantasy duology, Child of the Grove and The Last Wizard. I picked this up back in high school based on the lovely cover art (which I note has been redone recently to be trendily dark, teal, and high-contrast), subsequently reread it several times, and then lent it out repeatedly for a number of years. I only just recovered it, in fact, and celebrated with a rapid reread (the first in almost 10 years, I think).

Child of the Grove concerns the birth and ascendance of the world’s final wizard, a quasi-dryad named Crystal, who is conceived in order to combat the world’s cruel, corrupt, imperializing second-to-last wizard. The Last Wizard details Crystal’s adventures after she’s already saved the world – a narrative conceit that I enjoy.

The series is firmly middle-of-the-road high fantasy, complete with many glowing jewel-colored eyes, internal monologues about the fate of the world must rest on one’s young shoulders, and a villain remarkable only in how generic he is. (He does have chest hair in addition to his flowing red-gold locks, which is how you know this is from the ’80’s.)

However, Huff executes the usual conventions with a really likable combination of toughness and sweetness, her characters (minus aforementioned villain) are credible (if some of them are eye-rollingly juvenile, other characters actually call them out on it), and her plots are briskly paced and incorporate a fun variety of narrative elements.

Child of the Grove was always memorable to me in how it moves through several distinct narrative stages: first, a few rounds of mythical backstory, mixed with multigenerational soap opera. (Oh how I loved the soap opera in high school – I can’t take it so seriously anymore, but the characters are still pleasant to read about.) Then, a bracing outbreak of war; followed by a blend of training montage and magical war-waging; followed by, finally, a very brief Quest. (On rereading, it was puzzling to me that the climaxes of both Child and Wizard happen so damn fast; they felt a bit anticlimactic, Child especially. My view of Wizard was probably skewed by the fact that I still remembered the climax with almost word-for-word fidelity, so it was hard to actually perceive the action as written, if that makes sense.)

Other points of appeal: