“The Bohemian Astrobleme” (2010) is another droll, diverting spy romp in Baker’s Company universe, the second to feature the spyin’, whorin’, but mostly shruggin’-at-the-foibles-of-men Women of Nell Gwynne’s. (After Baker’s death in 2010, her sister, Kathleen Bartholomew, finished her final novel of the Women, On Land and at Sea, which was just released this past December.)

This time, Lady Beatrice is dispatched to serve in a transcontinental operation regarding the acquisition of the titular mineral, of great scientific interest to the Company’s efforts, which are described as follows:

“The Society’s goal was the improvement of the human condition through the secret use of technologia, until such time as humanity became advanced enough to be made aware of its benefits. It was generally agreed that some sort of world domination would be necessary before that day arrived, but at the present time the Society was content merely to gather power and pull strings attached to certain government officials.”

The story is elegant, economical, briskly paced, and, as above, full of deadpan humor perfect in its quiet delivery. My only disappointment is that the depiction of Lady Beatrice doesn’t progress beyond that initially introduced in “The Women…” (cool, self-contained, effortlessly competent), since she’s a character begging for further development. A static sketch of a hypercompetent cipher is rarely fulfilling, no matter how entertaining. Inevitably, I’ll have to make it my business to pick up the novel.

“Strange things can happen at a crossroads, and the crossroads outside of Arcane, Missouri, is no exception. Thirteen-year-old Natalie Minks knows all the odd, mysterious tales about her little town – she grew up hearing her mother tell them. But even Natalie is not prepared for the strangeness that’s unleashed when Dr. Jake Limberleg’s Nostrum Fair and Technological Medicine Show rolls into Arcane with its bizarre tonics and elaborate, inexplicable machines. When Natalie finally gets a close look at the intricate maze of the medicine show, she knows in her gut that something about this caravan healers is not right… and that Arcane is in grave danger.”

Like Bradbury’s classic Something Wicked This Way Comes, Kate Milford’s The Boneshaker is a spooky circus mystery-adventure set in a Midwestern town, and featuring young protagonists who must reckon with the insinuation of evil into their lives. Realizations about both mortality and morality loom large. The Boneshaker has more of a Western feel, though, shaded with near-apocalyptic gloom; the seductions of the circus have an even more explicitly diabolical flavor. Nick Cave’s “Red Right Hand” would be right at home on a soundtrack for the novel, I think.

As protagonist, Natalie is an intriguing foil to the unearthly disruptions of Limberleg’s Nostrum Fair: inquisitive, skeptical, mechanically minded, a little bristly and imperious. Admirably, her inquisitiveness extends to the emotional realm, as increasingly throughout the book, she tries to get inside the heads of the people she’s known for all her life, but frequently taken for granted. From the townspeople who have encountered evil in its various forms before, including her own mother, she gleans haunting snatches of narrative that deepen the novel’s Biblical mythos and lend it an absorbing sense of grandeur and pathos.

Unfortunately, Milford’s prose, though carefully detailed, is on the flat and list-y side, even when she write scenes that should be demonically animated:

“She didn’t have to be told to run. The harlequin lunged after her.

She sprinted and dodged, not caring which twists and turns she took in the maze of tents. Bells jingled overhead; the harlequin had taken to the wires again.

Her feet kicked up dust and slid on old straw. The things in her arms stirred restlessly. The Amazing Quinn raced alongside and above on a wire parallel to her path.”

And so on; the rhythm and syntax remain monotonous, and the descriptive choices expected. It’s troublesome, too, that one of Natalie’s mentors seems to have been tipped out directly from the Magical Negro mold. “Nothing to do but play my guitar and dispense advice to white folks in need, doot de doo…”

What Milford does do beautifully is frame rational-minded Natalie’s collision with the realization that the world is insistently, terrifyingly irrational. Her town and the crossroads are much older and stranger than she thinks they are; many of the adults around her have known far more suffering and struggle than she could have imagined; and moreover – worst of all, even – they, too, are fallible and vulnerable. Milford has things to say, too, about the power of story and memory, and weaves in the usual YA subplot of learning to stand your ground in the face of fear, but Natalie’s coming to grips with the pervasiveness of evil and mortality is by far the most affecting narrative strand.

I won’t be seeking out the sequels, but all in all, The Boneshaker was an entertaining read, both thoughtful and goosebumpily suspenseful, with satisfying lashings of American folklore and Christian mythology. I’d recommend it as a companion for a thunderstormy summer afternoon.

For a previously reviewed dark fantasy also featuring Western and Biblical touches (and, coincidentally, a red-haired doctor of dubious humanity), see: The Music of Razors, by Cameron Rogers.

Go to:
Kate Milford: bio and works reviewed
The Music of Razors, by Cameron Rogers (2007): review by Emera

(N.B. The Women of Nell Gwynne’s is out of print, and has since been republished as Scarlet Spy.)

“In any other neighborhood, perhaps, there would have been some uncouth speculation about the inordinate number of females under one roof. The lady of the house by Birdcage Walk, however, retained her reputation for spotless respectability, largely because no gentlemen visitors were ever seen arriving or departing the premise, at any hour of the day or night whatsoever.

Gentlemen were unseen because they never went to the house near Birdcage Walk. They went instead to a certain private establishment known as Nell Gwynne’s …

Now and again, in the hushed and circumspect atmosphere of the Athenaeum (or the Carlton Club, or the Traveller’s Club) someone might imbibe enough port to wonder aloud just what it took to get an invitation from Mrs. Corvey.

The answer, though quite simple, was never guessed.

One had to know secrets.”

The Women of Nell Gwynne’s is a breezily entertaining steampunk spy-thriller novella, serving up fast-paced intrigue, witticisms, and gadgetry, with the occasional amusing period detour into e.g. the niceties of Victorian cake decoration. There’s a modicum of social commentary, too, on the precarity of being a woman in a man’s world: the Women of Nell Gwynne’s are societal cast-offs, disgraced former gentlewomen (and one former workhouse girl) offered recourse as courtesan-intelligencers. Their sponsors are the Gentlemen’s Speculative Society, a mysterious organization of spies and inventors that eventually gives rise to the Company, the subject of numerous of Baker’s other works (which I’ve never read). Here, members of Nell Gwynne’s are dispatched to investigate the disappearance of a Society member on assignment at the country manor of a secretive aristocrat, who appears to have developed a taste of his own for invention.

Most of the Women are charming sketches, like the three cheeky Misses Devere and the cross-dressing Herbert/ina, who has “the appearance of a cupid-faced lad fresh from a public school whereat a number of outré vices were practiced.” (Predictably, I was enamored with the latter.) The only psychological interior to which we have access is that of Lady Beatrice, the Scarlet Spy. Lady Beatrice is a survivor of abduction and rape during the disastrous first Anglo-Afghan War, who returns to England only to be promptly disowned by her family. Her relationship with herself – her horrific past, her mechanically unstoppable will to survive, the wary distance she keeps from herself as a physical being – is the story’s most compelling element. While The Women of Nell Gwynne’s didn’t have me hankering to dive into the entirety of the Company series, I am curious to read the further Nell Gwynne’s novelette The Bohemian Astrobleme, to see whether Lady Beatrice is further developed as a character.

Edit to add: Reading about the life of the actual Nell Gwynne, a 17th-century brothel girl turned celebrated comedienne turned royal mistress, is a must. Amazing woman. 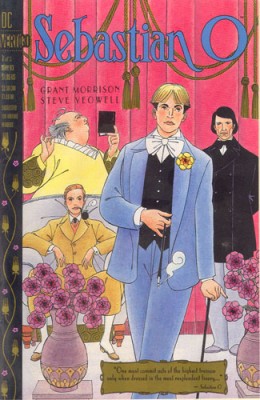 FreakAngels is an ongoing sci-fi/steampunk comic by Warren Ellis, syndicated online for free in weekly, six-page installments. It was begun in February of 2008, and I’ve been following it since then (I think I first saw it publicized on Coilhouse, my favorite blog). It follows the adventures of a group of young psychics who’ve dubbed themselves the FreakAngels, and hold down a corner in a Thames-inundated London.

It’s variously a futuristic survival story and a character-based drama, with a cast of somewhat cliché (one of the characters is basically a clone of Delirium from Neil Gaiman’s Sandman; unsurprisingly, she seems to be the fan favorite) but likable protagonists. The cool, clean art, by Paul Duffield and a team of colorists, tends to be shaky anatomically speaking – noodle fingers are frequently in evidence – but the characters are attractively drawn and the backgrounds are very satisfyingly detailed, especially when it comes to architecture. If some of the FreakAngels’ outfits (and hair colors) are somewhat improbable given their living circumstances… can’t have steampunk without fun clothes. It’s also clear that Ellis has put a good amount of thought into his characters’ survival strategies, so it’s fun to see their efforts at scavenging and rebuilding society via a mix of past and present technology – steampower and solar panels have both come into play.

All in all, FreakAngels will probably appeal to fans of Firefly and similar tales of scrappy, foul-mouthed, hyper-competent, and-therefore-you-must-love-us families thrown together by circumstance. (I personally have mixed feelings about that particular formula as perfected/beaten to death by Joss Whedon, but clearly am susceptible to the charm anyway.)

I suspect I might be hooked in part because of the method of delivery – getting my FreakAngels story kick is a fun way to start a Friday. Print collections are also being issued as the comic goes on.