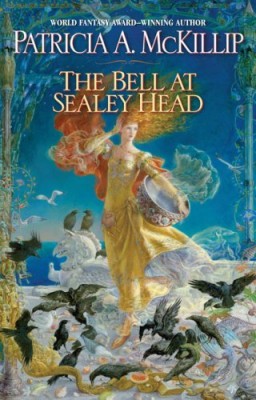 The Bell at Sealey Head contains the most outright sexual passage I can recall reading in any of Patricia McKillip’s work. Tellingly, it’s also a tongue-in-cheek commentary on bibliomania:

“The odd thing about people who had many books was how they always wanted more. Judd knew that about himself: just the sight of Ridley Dow’s books unpacked and stacked in corners, on the desk and dresser, made him discontent and greedy. Here he was; there they were. Why were he and they not together somewhere private, they falling gently open under his fingers, he exploring their mysteries, they luring him, enthralling him, captivating him with every turn of phrase, every revealing page?”

McKillip was possibly my most protracted love affair during my high school reading. Though I’ve grown away from her work a bit since then (particularly since I wasn’t much taken with her last two novels), reading The Bell at Sealey Head was a pleasant return. It’s a bit like Georgette Heyer meets Ombria in Shadow. Much of the novel concerns itself with gentle comedy and small dramas of courtship, set in the titular seaside town “at the edge of the known world.” But the underlying mystery that drives the plot concerns a ghostly bell that rings at sundown, and a strange world of knights and ritual occasionally glimpsed through the doors of a decaying manor.

McKillip occasionally writes overwhelmingly large, hectic casts, but here the slow pace and loose plot give the characters room to breathe. I found most of them endearing, if not all terribly memorable as individuals. There’s a book-obsessed innkeeper’s son (Judd); a merchant’s daughter being courted by a cloddish squire, but who would much rather write novels; an itinerant scholar with a keen interest in the history of the phantom bell; a maid who has befriended the princess who lives in the manor’s past; and so on.

As in The Tower at Stony Wood, there’s a strong feminist thematic, with a particularly pointed attack being made on the conventions of the courtly romance: the princess is made to constantly fulfill fractured, meaningless rituals in service of the faceless knights who ride in and out of the castle, with the expectation of eventually being married off to one of them purely for the purposes of bearing another child to carry out the rituals. (Spoiler: We eventually learn that she has literally been imprisoned in images out of a storybook.) Several of the other female characters are quietly rebellious, and seek self-determination or otherwise subvert social expectations. One of the most interesting, though least-seen characters is a woman of wealth who is forced to conceal her intelligence and private desires by perfecting a mask of exquisite boredom and frivolity.

All in all, a sweet, thoughtful, and frequently witty read. Not as urgent or eerie as my favorites of McKillip’s works, but as usual, it’s full of memorable, otherworldly imagery, rich and occasionally glinting with menace. It also has some wonderful lifestyle inspiration, in the form of an herbalist who runs around barefoot and lives in a book-filled, garden-surrounded house built in and around a hollow tree trunk. Excuse me while I radiate envy/aspiration…

Go to:
Patricia A. McKillip: bio and works reviewed