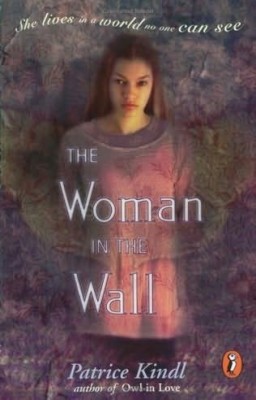 Rendered nearly invisible by her painful shyness, Anna is the middle girl of three sisters living with their mother in a rambling Victorian home. At seven years old, terrified by the impending threat of school, she retreats into passageways and secret rooms of her own construction, and lives within the walls of her home for the next seven and a half years. Anna is content to hide away as a sort of household ghost, nearly forgotten by even her family, until her own growth as a woman renders her “invisibility” no longer possible. A stray love note pushed through the walls of her refuge appeals to her developing emotions, and the time approaches for Anna to once more venture into the outside world.

I randomly spotted The Woman in the Wall on Kakaner’s bookshelf at some point around when we first began exchanging reading material on a regular basis, and the premise deeply appealed to me since I’m a. sorta shy and b. obsessed with secret nooks and passageways, to the point that a home-within-a-home sounds right up my alley. Even outside of my particular quirks, the concept is an emotionally powerful and imaginatively appealing one.

Unfortunately, Kindl’s writing isn’t up to the task. Although the book aims for a wistful, playful mix of Gothic fairy tale and magical realism, it increasingly dissolves into a weepy, unconvincing pastiche, with the narration lurching between “artsy,” “quirky” whimsy and banal adolescent histrionics. Too much pretension (or, more charitably, ambition), not enough substance. Though Anna’s story could have been a moving modern fairy tale about escapism and self-isolation, The Woman in the Wall more often seems clumsy, superficial, and implausible.