John Darnielle is the Mountain Goats, one of my very most favorite bands, a band-of-my-heart. Wolf in White Van was his first full-length novel, and was nominated for the National Book Award when it came out. (And, great recent news: his next novel is slated for release early next year.) 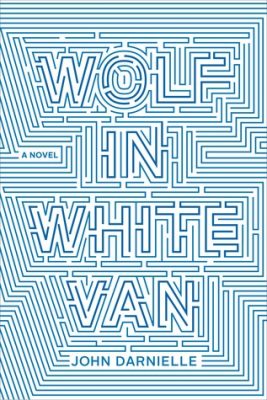 This is tragic and beautiful, a dreamy tissue of all of the themes that constitute a sort of home base for Darnielle’s work, the source from which he is always elaborating: family dysfunction in Southern California; teenage alienation, intense to the point of being inarticulable; and its expression in the potent, feral paraphernalia of 70’s-80’s Goth/metal/fantasy – skull emblems, Conan the Barbarian, late-night television programs on Satanic backmasking, bags full of cassette tapes, arcades, dreams of bone thrones and infinite wasteland.

Darnielle’s protagonist begins in a sort of mild rubble. Following a terrible incident as a teenager, he became a shut-in; he now makes his living by running a play-by-mail apocalyptic RPG. He’s just exited the legal trial that investigated his potential culpability for a tragic choice made by two of the players of his game – two of his favorite players. From here, he moves backward and inward to the scene of his own teenage trauma. He paces through a flowing series of vignettes: chance encounters with strangers who break his present-day solitude, almost imperceptibly cruel past conversations with his parents, childhood imaginings, all exuding talismanic significance.

These express simultaneously a piercing sense of humanity, and an inviolable disconnection. He is happy today, in his own way (I’m always drawn to characters who are self-made, faintly holy hermits), but still we step back and back to the black, black place of his trauma. Life is soft and sweet and bitter, and there’s a black vein running through it all.