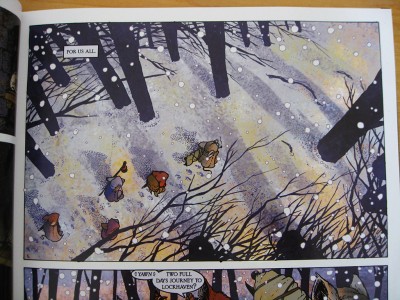 “After Midnight’s Rebellion in the Fall of 1152, the following Winter proves to be a cold and icy season. The Guard face a food shortage threatening the lives of many a mouse in the Territories. Some of the Guard’s finest – Saxon, Kenzie, Lieam, and Sadie, with the old grayfur Celanawe by their side – traverse the snow-blanketed Territories, acting as diplomats to improve relations between the mouse cities and the Guard, and seeking vital supplies for their headquarters at Lockhaven. But hungry predators, the dangers of ice and snow, and a wrong turn into the haunted depths of the abandoned weasel tunnels of Darkheather place even so intrepid a band of Guardsmice in mortal peril…”

As Kakaner assured me, Mouse Guard vol. 2 has much more emotional meat on its bones than did the first arc. Reading this volume, it’s clear that Fall 1152 was just a taster; here our sense of the Guard’s mythology and traditions is deepened, and the worldbuilding continues apace, both within the comic and in the (again) adorable and obsessively detailed appendices.

Midnight’s obligatory power-hungry rebellion is revealed to have longer-lasting implications for the politics of the Mouse Territories and the integrity of the Guard, while Sadie, Kenzie, and Saxon’s descent into the mindblowingly byzantine tunnels and vaulted caverns of Darkheather brings us closer to the darkness and horror that lie in the Guard’s recent past. On Lieam’s end of things, Celanawe drops hints about the mythology of the Black Axe – a lone, mysterious arbiter of justice – and teaches some lessons about self-reliance. All of this is clearly paving the way for Lieam’s impending ascension to full-blown badass. And then there are epic battles with a vengeful one-eyed owl, and torrents of bats in purplish gloom, and beautifully desolate lamplit snowscapes, and Kenzie/Saxon bromance (brodentmance?)…

Also, I underwent a weird little cognitive tweak reading this volume. During the first I’d felt I just couldn’t get the characters, and tenatively chalked it up to the dialogue being a bit stilted. This time around I realized that it’s also that the mice generally only have two facial expressions: peering intently, or squinting determinedly. And once I realized that, I was fine with it; it’s like I’d placated an otherwise expectant emotional processing circuit. Conclusion: Brains are weird. Have some more cute mice. 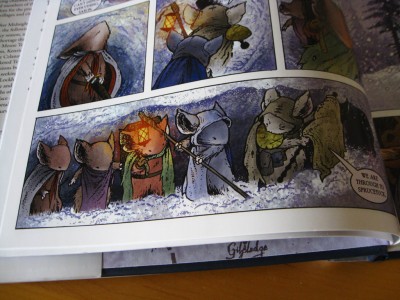