If you’ve been following us for a while, you’ve probably noticed our mild obsession with the works of one Isaac Marion, a mysterious and sardonic Northwesterner who has independently published two novels and, on his website, many short stories – all horrifying, hilarious, and heartwarming in various measures. I first stumbled on his signature story – “I Am a Zombie Filled with Love” – by chance in the summer of 2008, fell in love, and shot the link to his website over to Kakaner.  Both of us became avid followers of his work.

This fall, we were thrilled when Marion announced that his novel Warm Bodies, a story about love after the zombie apocalypse, and based on the original “I Am a Zombie Filled with Love,” had been sold to a major American publisher. Even more recently, he announced that it’s also been sold for publication in the UK, and in Spanish, Italian, Portuguese, Russian, and Korean. On top of all that, he’s planning to self-publish a collection of his short fiction – something Kakaner and I have hoped for for a long while.

This week, we had the honor of actually interviewing Isaac Marion. Below, he shares a little (actually, a lot) about his life and influences, and reflects on Mass Amateurism, the zombie trend, and more. 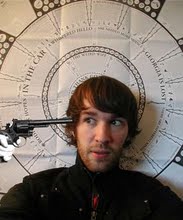 TBL: Isaac, I don’t know if you’ve noticed, but we try to write an author page for each author whose works we review. Could you give us a mini-biography of your life until now and anything else you think should be in an author bio of you?

I grew up in northwestern Washington and have lived in or near Seattle most of my adult life. My family was really poor while I was growing up; we lived in a lot of weird places, like tents and tow-trailers and my uncle’s mossy motorcycle garage in the woods, which was eventually condemned by the city and burned down. (I have a photo of it burning posted above my desk, as a reminder that things could be, and were, worse.) Even when we were living in real houses or at least mobile homes, we moved a lot; 27 times total before I set out on my own.

The year we spent in that motorcycle garage, which I dubbed “The Hovel”, was the year I started writing. I was 16, so of course I wrote a mind-blowingly overwrought thousand-page fantasy epic called “The Birth of Darkness”, which will never be read by anyone as long as I’m alive to prevent it. I always knew I didn’t want to do any kind of job that requires a degree so I skipped college and taught myself how to write by just reading and writing a lot, which I think was time better spent. Several years and a few dozen weird and unconnected jobs later, it paid off, and now I am apparently on course to living the dream. Exploding high-five.