“When strangeness threatens to engulf the world, a strange man will come to save it. Sent to investigate a mystery with supernatural overtones, Hellboy discovers the secrets of his own origins, and his link to the Nazi occultists who promised Hitler a final solution in the form of a demonic avatar.”

It’s alllll about the broody menace. I was not too impressed by my first read of Hellboy‘s first volume, five years back, having gotten idiotically hung up on what I dismissed at the time as “unoriginal” plot elements. (Hello, 2006 Emera, paying tribute to pulp favorites is the point…) This time I just sat back and let the consummately pulp-noir atmosphere swallow me up, to much better effect.

After all, there’s so much to enjoy about Hellboy. The storytelling, even if often predictable, is crisp and fast-paced, cannoning the reader from a glimpse at Hellboy’s WWII origins into a present-day case featuring frog demons, an Arctic expedition gone awry, and a cursed family. The dialogue and exposition (vol. 1 is kinda exposition-heavy) are loaded with menace and portent, the action sequences are so beautifully composed as to look balletic (even when they mostly involve Hellboy punching demons), and now let’s talk about how much I love Mike Mignola’s art.

LOOOOVE. I love the way that he builds his compositions mostly out of shadows and looming statuary, frequently in suggestive poses (when Hellboy first manifests in a churchyard, the two angels carved in relief in the background seem to make gestures of threat and aversion); I love the way his craggy, massive, mostly stone-faced figures lend themselves to expressions of unexpected tenderness and piercing emotional simplicity. One of my (many) favorite single panels in this volume is the one below, in which Hellboy attempts to comfort his adoptive father, the aged paranormal investigator Trevor Bruttenholm: 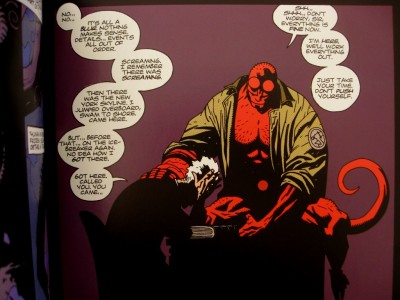 This volume includes generous art extras: early sketches of Hellboy, the two mini promotional stories in which he first appeared, and an excellent gallery of guest art. I should note though that the trade paperback edition has terrible binding – the cover cracked away from the glue on the spine after I’d been reading for about 45 minutes. So, definitely not worth it unless you happen to find it on sale.

That aside, Hellboy is eerie, tightly written, and features an intriguing cast and Lovecraftian/Revelations-inflected apocalyptic mythos. (The chapter headings have scenes from Revelations as their backgrounds: the seven-headed beast, the Four Horsemen, etc. Again, LOOOOVE.) This time around, I’m going to have to follow the series to its finish; I’d love to get to know Hellboy and his teammates better.