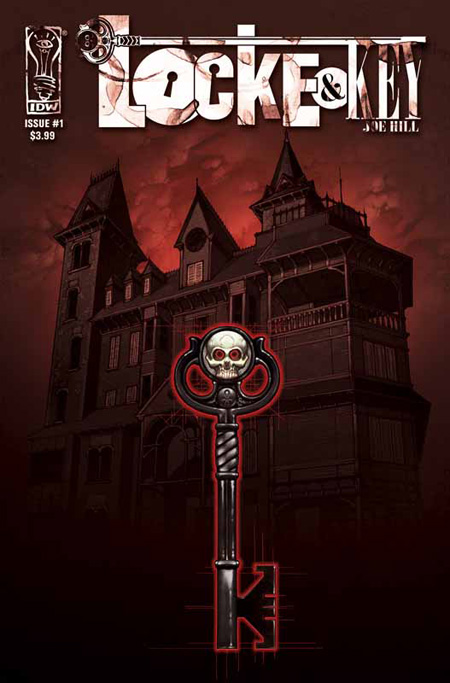 After their father is murdered by a disturbed former student, the three Locke children travel with their mother to start a new life in an unlikely haven: the Keyhouse, an ancient mansion on an island named Lovecraft, off the Massachusetts coast. Keyhouse, with its sprawling, dilapidated grounds and many doors, is where their father grew up, and where he insisted – with unaccountable prescience – that his family stay should anything ever happen to him.

Here, oldest son Tyler immerses himself in guilt over his tumultuous relationship with his father and his possible culpability in his death, while middle sister Kinsey struggles with her overwhelming fears and loss of sense of self in the wake of the violent attack. Meanwhile, 6-year-old Bode explores the house unattended, and soon discovers something of the curious properties of Keyhouse’s doors, and the keys that can be used to unlock them. Unfortunately, Bode’s explorations bring him within the reach of an unsavory force dwelling on the mansion’s grounds, with a particular interest in keys and what they can achieve.

First of all, books with ribbon bookmarks and nicely designed endpapers = win: 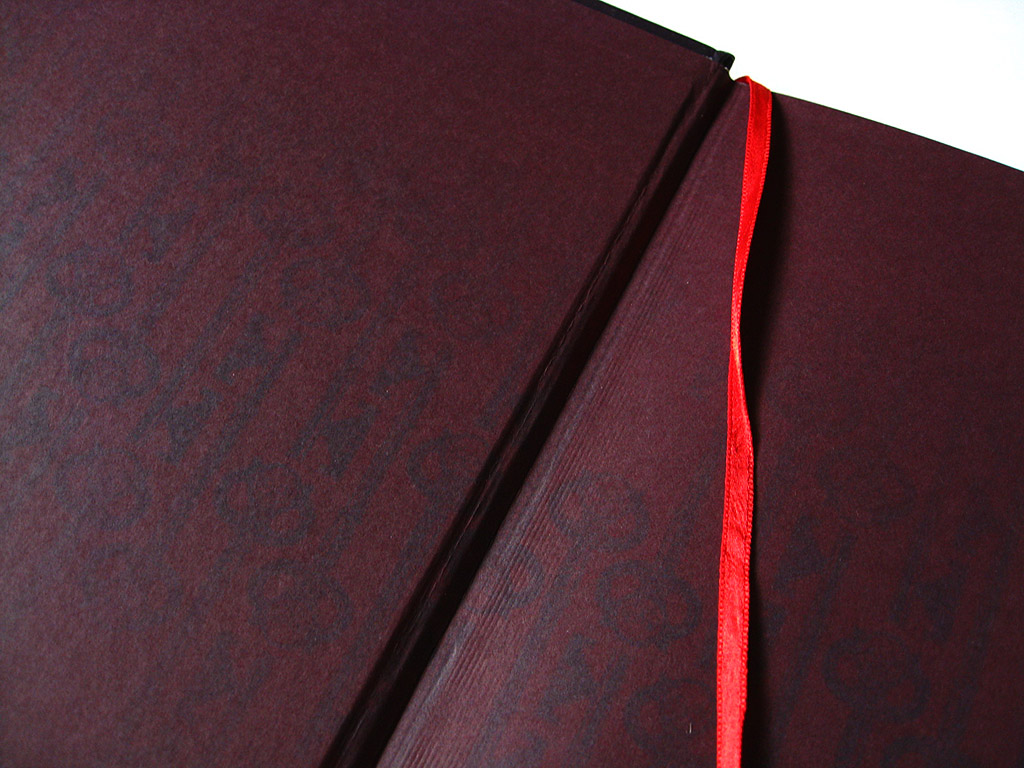 (might be a bit hard to see, but the papers have a pattern of black keys.)

For those who might not already know, Joe Hill is Stephen King’s middle son, but has eminently succeeded in making a name for himself outside of his father’s reputation. I’ve been meaning to read his first novel (Heart-Shaped Box) and short story collection (20th Century Ghosts) for a languishing Forever, but Locke and Key Volume 1 ended up being my first foray into his work, after I grabbed it off of Kakaner’s shelf last summer. I went in with high expectations, and came out jonesing for moooore.

Locke and Key is an incredibly tight, confident graphic novel debut – Hill pretty much flaunts his easy mastery of both horror and the graphic novel. (I mean, you do have to be pretty ballsy to name your town-o’-hauntings “Lovecraft.”) So while many of the visual and plot elements may be familiar – a family recovering from mundane horrors only to be plunged into the supernatural, an eerie well, a murderer with an unhappy past – they’re used with uncommon style and confidence, in the service of some really solid, gripping, and emotional storytelling. I wanted this volume to go on forever, and a small corner of my brain is continuing to kick and scream until I can pick up the next. 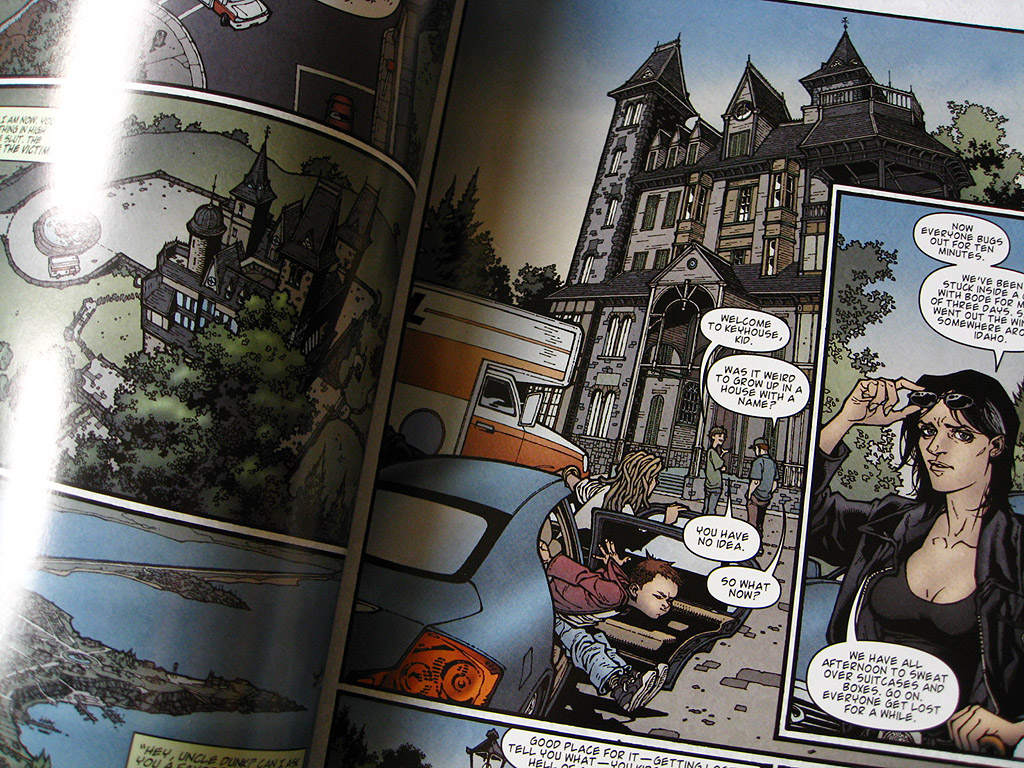 I admit to being initially disappointed upon seeing that Gabriel Rodriguez was the artist, since in the graphic novel adaptation of Clive Barker’s The Great and Secret Show, which shares its artistic team with Locke and Key, I found his bold, angular style stiff, overexaggerated, and prone to gratuitous boobage. But to my pleasant surprise, I found his work utterly winning here. Partly, I think it benefits from story content less hyperbolic than TG&SS‘, as well as from character art that’s become far more varied and emotive. The amount of detail and texture lavished on each panel is stunning – check out Rodriguez’s gorgeous renderings of the Keyhouse on both pages above. I often found myself flipping back and forth just to look at a particular panel again, comparing perspectives or searching for details I hadn’t picked up on before. And as suggested above, I love, love, love his character designs for this series, from Tyler’s tightly held mouth, lantern jaw, and downcast eyes, to an enjoyably slinky, sexy (but not hypersexualized) villainess. 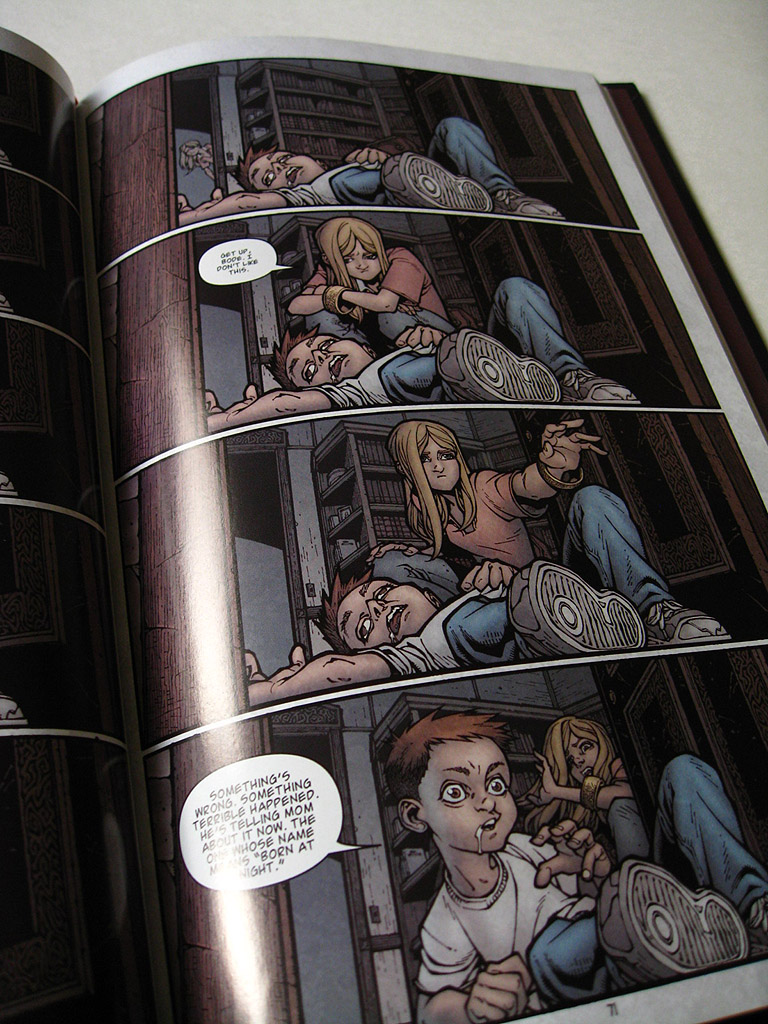 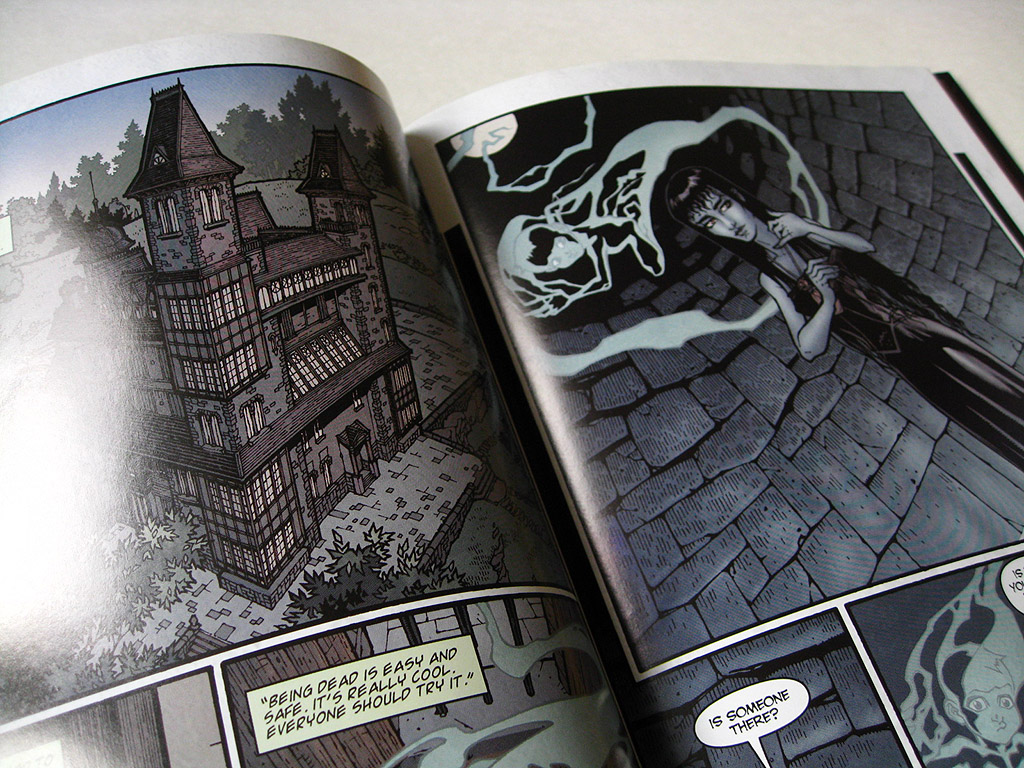 Together, Hill and Rodriguez do a fantastic job both of  portraying a family in pain and of creating a taut, suspenseful, deliciously creepy adventure. There’s not a square inch of panel or a line of dialogue wasted, and the characters are moving and deeply real. I’m in love with the Locke family, particularly Tyler and Bode, and can’t wait to see how their character and dramatic arcs play out. I did like Kinsey as well, but found her “gotta find myself again, whoops that only took about 10 pages” narrative more predictable and too quickly forced. Still, I think Locke and Key is beautifully successful in inspiring compassion for its characters – this is a graphic novel with a lot of heart, which makes it all the more enjoyable and rewarding.

Towards the end of the volume is one of my favorite moments: one character remarks to Bode (paraphrasing here) that children always think that whenever they enter the story is the beginning, when in reality the story started a long, long time ago. This works on so many levels. On the meta level, it’s a wonderful reflection on storytelling, and how it can shape our perceptions of our lives; within the world of the Keyhouse, it’s a challenge to Bode and the rest of the Locke family to claim this story as their own, in spite of all the forces against them; and for the readers, it’s a tantalizing hint at how deep the Locke and Key mythos will go. Right on – the only question now is how soon I can get the next volume into my grabby little hands… 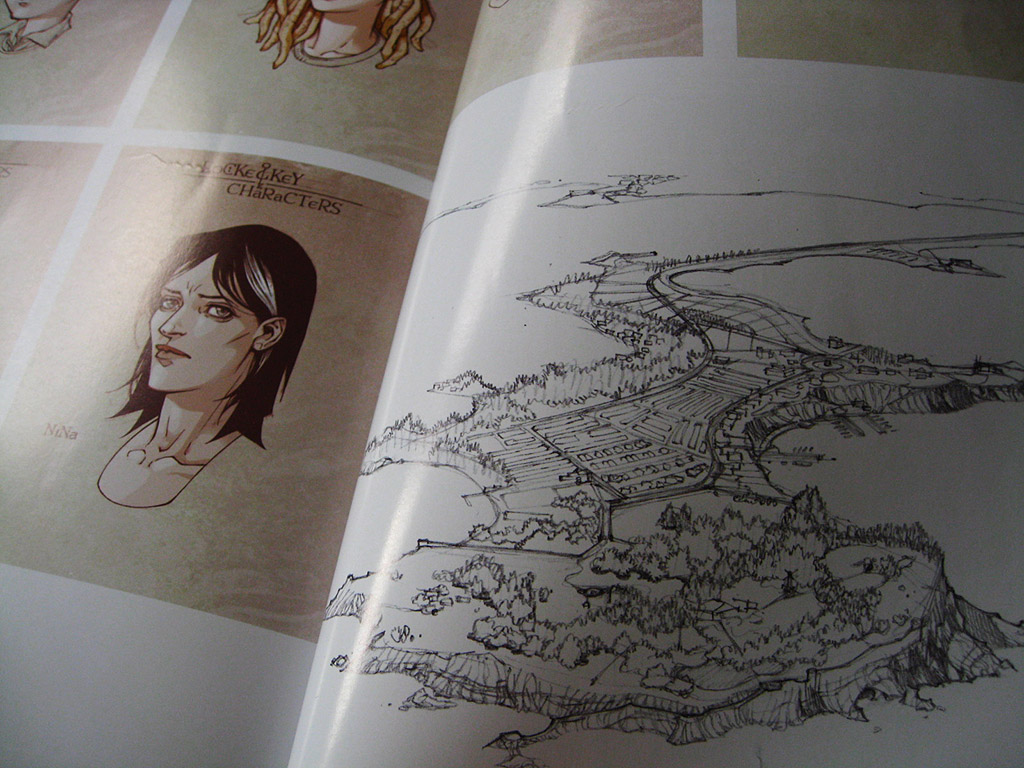