I’ve been doing some thinking this spring about figuring out reviewing practices, or a mindset, that don’t have me regularly consuming 3+ hours for writing and headscratching that I meant to have done in one, doesn’t give me hives, and generally achieves a higher fun/stress ratio. We’ll see how this goes. 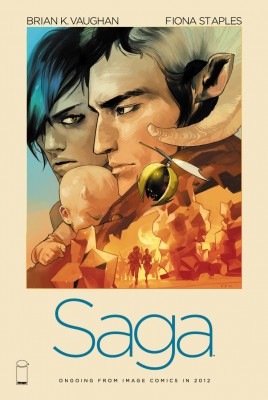 Oh Saga! Brian Vaughan and Fiona Staples’ Saga is so much fun that I can only assume that if you like fun, you will like Saga. It seems like Vaughan set out to create an X-rated Star Wars in comics – galloping galactic conflict in an expansive science-fantasy universe, plus some very colorful violence, and equally colorful sexytimes wherever characters seem like they might want or need to have ’em. But its immense irreverence has me reaching for Firefly as the easiest comparison.

However, the humor feels less strained to me than Firefly‘s. (The ticking of Joss Whedon’s brain behind the goings-on, working at being quirky or heartrending or whatever, is often too loud to me.) This is helped along by how boundlessly, weightlessly, beautifully weird the universe of Saga is.

Alanna and Marko are Romeo-and-Juliet runaway soldiers and new parents – much of the emotional weight of the comic rests in the anxieties of parenthood; the star-crossing romance seems forgettable by comparison. Their getaway ship is an enormous tree powered by personal sacrifices. Their babysitter and guide is a bisected ghost-girl (whose choice in headgear and allover pinkness reminded me of Runaways‘ Molly). Their pursuers include a TV-headed robot prince who just wants to get home to his recently pregnant wife, and a taciturn uber-mercenary with relationship hangups and a puma-sized, lie-detecting hairless cat. And given that all of the characters, even those that only appear for a few panels, are believably animated by a cantankerous, stubborn humanity, none of this feels like a burden of whimsy on the reader’s patience; I moved to greet each new surprise with incredulous laughter, and greedy eyes.

Fiona Staples (check out her sketchblog here) paints lushly, lushly, with a palette heavily reminiscent of the cool, dreamy neons of, naturally, 1970’s sci-fi – the soulkillingly garish bordello planet where The Will (aforementioned mercenary) makes a detour put me in mind of Bespin’s Cloud City, on acid.

Much of the imagery is clearly, simply meant to make the reader pause, and feel the uplift of wonder; I did plenty of that. Oh, those panels of the ship-tree drawing itself together to jet through space; oh, the towering beasties and haunted blue-green woods and luminous mountainscapes. 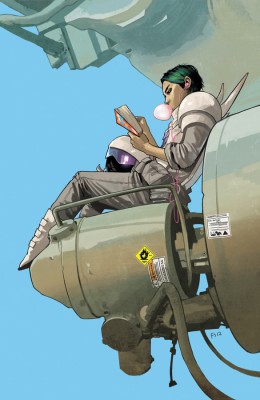 I am grateful that this comic exists, and am going quietly insane until the second trade comes out (July 2!).