Will I ever tire of vampires? It seems unlikely, at this rate. Kim Newman‘s novella “Coppola’s Dracula” was my first foray into his post-vampire-epidemic alternate history. Here he reenvisions Francis Ford Coppola’s Apocalypse Now, Dracula-style.

Protagonist Kate Reed is an Irish vampire – a contemporary of Bram Stoker, in fact – who’s been brought on the set of Coppola’s bloated, luckless production as a consultant, and bears witness to disaster after near-disaster as filming staggers onward. Interspersed with her coolly amused observations are excerpts of key scenes from the script, all paralleling Apocalypse Now (and Dracula, of course) and sharply rendered in Newman’s clipped, punchy, darkly humorous style.

I would probably have appreciated the central conceit more had I been more of a film buff, but I still found the parallels clever and entertaining, and Newman is deeply meticulous in imagining his alternate universe. However, the novella left me rather cold beyond that – though Kate is well-developed as a character, she’s so dispassionate that the story lacks emotional effect, other than conveying a lingeringly tragic kind of Cold-War disaffection. Well, that’s probably deliberate, so count that as another stylistic success for the story. 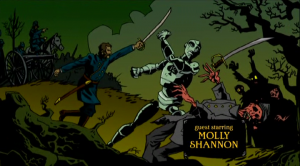