Nobody Owens (Bod) lives in a graveyard, has ghosts for friends and family, and a mysterious neither-living-nor-dead guardian. As he grows up, he has to learn both the ways and secrets of the large graveyard as well as deal with the outside world. This foreign world is extremely dangerous place for Bod because the assassin of his family is still on the prowl. Throughout the journey of his childhood Bod basically learns about growing up– girls, beings which are neither living nor, and slowly, how to function in the outside world.

Way to go Neil Gaiman! All those months of meticulously following the progress of The Graveyard Book on his blog certainly paid off– the day it was released, I headed over to my local bookstore, plucked one brand spanking new copy off the display, and settled into an armchair to read for the next couple hours. I read it all in one sitting, and in about a week, after procuring enough monetary funds, I immediately bought the book.

I have to say The Graveyard Book was spot on in so many respects– character development, pacing, storytelling… to name a few. Sure Bod lives in a graveyard, but his childhood frustrations and adventures  are so relatable. He has his own quarrels with his guardians, fighting against the constraints of the graveyard much like children do their own homes. The imagery is simply splendid, especially Bod’s adventures beneath the graveyard and all the different fantastical creatures. And, who doesn’t like ghosts, vampires, and other such creatures? I definitely felt transported into another world through that imaginary magic portal every child wants to travel through. Above all, I was definitely caught up in the snowball effect of the novel– you’re reading and the suspense and developments keep piling on until suddenly, you realize you haven’t been breathing for several pages. That is the feeling I’d been longing to experience again, that same thrill of reading Patricia Wrede or Brian Jacques or J.K. Rowling as a child with breathy light-headedness.

The Graveyard Book has replaced Coraline as my favorite Gaiman YA fiction. It is fantastical, yet down to earth at the same time, and strikes a wonderful balance between barreling trains of action and meandering scenes chock full of character development. Quite honestly, one of my recurring gripes with Gaiman’s works is they typically feel a bit cold, despite being terrifically written and crafted. I usually enjoy every minute of a Gaiman novel or comic, but come away feeling a bit dissatisfied, as if it didn’t successfully speak to me on a deeper level. The Graveyard Book, however, was warm and honest, and definitely a great read for any child or even adult. 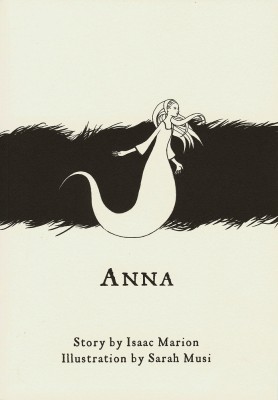 Anna is the wistful tale of a young ghost who falls in love with a human boy. When I first stumbled upon Isaac Marion‘s short fiction online, it was one of the stories that most enchanted both Kakaner and me. In 2008, Marion self-published a 50-edition print run of Anna, with illustrations by Sarah Musi.

I love the size and feel of the book, especially the old-fashioned font and heavily textured, off-white paper cover. There’s something very individual-feeling about self-published books, and with their slight imperfections, you somehow you get more of a sense of the author, and of the effort that went into making the book. Instead of it being A Copy of a Book, it’s A Book, if that makes any sense.

Musi’s ink illustrations are delicate, charming, and perfectly suit the feel of the story with their elegant, expressive minimalism. Her elongated forms, fine linework, and use of negative space struck me as being faintly Gorey-esque. The story unfolds simply and gracefully, with quiet gravity. The details of Anna’s existence as a ghost are particularly captivating: my favorite moment of the story might be when she sinks into a mountain, seeking the comfort of its solidity.

As of July 2009, about 25 copies of Anna are still available for sale on Marion’s site. You can also see previews of the text and art at the same link. I treasure my copy, so if you’re at all tempted, I would buy one while you still can.