Thanks to Kakaner for reminding me that I had a serviceable, if brief, draft of a Machen review lying around – 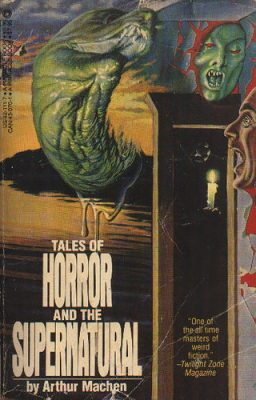 (I find this cover so upsetting)

Collection contents, with favorites in bold:

The Great God Pan, The White People, The Inmost Light, The Shining Pyramid, The Great Return, The Novel of the Black Seal, The Novel of the White Powder, The Bowmen, The Happy Children, The Bright Boy, Out of the Earth, N, Children of the Pool, The Terror

I find Machen simultaneously infuriating, and delightful and unforgettable. The first because his stories are so goddamn long, pedantic, and fussy – even for my easily delighted-by-Britishness tastes – and his prose, though cultivated, is basically conventional and uninteresting to me on the sentence level. Lots of things are described as “emerald,” for example.

Where he wins me over is

1) that same lengthiness… which sneakily builds and builds atmosphere and suspense, even while I was superficially chafing at his repetition and persnicketing, so that afterwards I was left quite a bit more uncomfortable and spooked than I had realized –

and 2) the ideas. Machen is famous for being a mystic, and I was rather dazzled watching him elaborate, in a dozen different configurations, the same basis of horror.

Machen’s is an ontological horror, where evil, sin, and wrongness arise from violation of categories and hierarchies: human and animal, human and proto-human, human and supernatural. The essential pagan in me is somewhat baffled by his strict definition of the primitive supernatural (Pan, fairies) as evil, baleful and actively malign (in contrast with Lovecraft’s other beings, which are rather colossally indifferent to humanity). This point remains emotionally and conceptually obtuse to me, but I find dreadfully fun his execution thereof. I’m particularly entertained by just how graphic and pulpy he gets at times, which seems at odds with his stodgy scholarliness.

More beautiful and transfixing, though, are the stories where the details of death are more obscure and metaphysical. “The White People” stands out in this respect, in addition to being of a narrative type that I love – cryptic young women’s diaries, which document a slow seduction or transformation into the magical. (See also Robert Aickman’s self-evidently titled “Pages from a Young Girl’s Journal.”)

The psychogeographic stuff is fun too, but I’ll have to leave it to a future reread to write about that. Also, so much Wales!

Lovecraft the terrible, the ridiculous, the great
The Haunted Dolls’ House and Other Ghost Stories, by M. R. James (1919, 1925) E

4 thoughts on “Tales of Horror and the Supernatural, by Arthur Machen (1948) E”