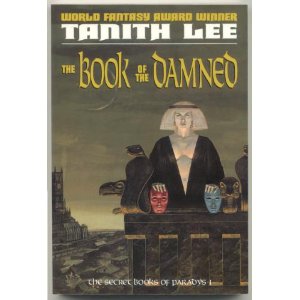 The final novella, “Empires of Azure,” again features a writer given a fateful artifact by a dying man. This time the protagonist is a journalist named Anna St. Jean, who took the original Andre St. Jean’s name as a pen name, echoing Jehanine’s appropriation of male identity and privilege. In a crowded café of early 20th-century Paradys, a beautiful stranger presents Mlle. St. Jean with a note: “In a week, or less, I shall be dead.” Thus chosen to be the recipient of his strange story, she finds herself drawn to the haunted, blue-windowed attic where he briefly made his residence, and where she witnesses – she thinks – his death. Left only with his journal, she is forced to uncover the origins of his tale, and pursue it to his ultimate end.

Though Anna is a less stylized and therefore more relatable protagonist, “Empires of Azure” was the least immediately compelling to me of the three novellas. Appropriately for its color theme, it’s chillier in feel; a subdued melancholy and methodical mystery format replace the emotional pyrotechnics of the preceding novellas. Nonetheless, Anna, like both of her predecessors, receives ecstatic visions of the otherworldly and transcendental, and the nature of her visions might make this the most sublimely weird story of the collection. Ghosts, a female impersonator, a goddess impersonator, and an honest-to-goodness deity all make an appearance, as does a glimpse at the history of Roman-era Paradys, foreshadowing its prominent role in the mythology of the next Paradys volume, The Book of the Beast. The collapsing of present and past witnessed by Anna also becomes a recurring theme of the rest of the series, as Lee continues to build an impression of Paradys as a multitude of overlapping stories and realities, separated only very thinly.