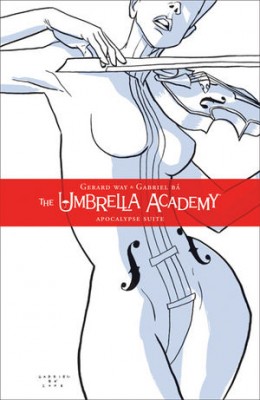 From the back cover:

“In an inexplicable worldwide event, forty-seven extraordinary children were spontaneously born by women who had previously shown no signs of pregnancy. Millionaire inventor Reginald Hargreeves adopted seven of the children; when asked why, his only explanation was, ‘To save the world.’ These seven children form The Umbrella Academy, a dysfunctional family of superheroes with bizarre powers. Their first adventure at the age of ten pits them against an erratic and deadly Eiffel Tower… Nearly a decade later, the team disbands, but when Hargreeves unexpectedly dies, these disgruntled siblings reunite just in time to save the world once again.”

The Umbrella Academy is clearly an enormous excuse for Gerard Way to make moody, tentacular love to all the tropes of the superhero comic. Father-figure issues, intra-team rivalries and romantic tensions PLUS frolicsomely deranged villains and a tortured, vengeful supervillainess PLUS nonstop, glibly surreal* storytelling = one gloriously dark, weird, and addictive series. I can’t speak to there being much real substance under the surface – other than Way’s manifest passion for superheroes and their particular brand of wounded humanity – but it’s a terribly stylish and entertaining comic, with occasional moments of real sweetness and charm.

Art highlights: Dave Stewart’s yummy colors – heavy on dark, desaturated oranges and purples. And I love the weight of Gabriel Ba’s figures, and their elastic, elongated torsos – makes for interesting stances and gestures. Also, I could stare at the cover forever. Hi, Vanya. What shapely F-holes you have.

I devoured the first volume in one sitting, and am jonesing to get my hands on the second. Also, this may well be my favorite single line of comic-book dialogue: “And just as I suspected – ZOMBIE-ROBOT GUSTAVE EIFFEL!”

* The kids’ surrogate mother is an animate anatomical model. What’s not to love?