Oskar is an alienated twelve-year-old living in a decaying Swedish suburb in the 1980’s. He is brutally bullied at school, and fantasizes often about striking back at his tormentors, keeping a scrapbook of newspaper articles about murders as his inspiration. Two new neighbors move into Oskar’s apartment complex: one an older man, and one, apparently his daughter, an androgynous girl named Eli who smells terrible, walks barefoot in the snow, and only comes out at night, but is nonetheless befriended by Oskar.

If you know anything about vampires, you can imagine where this is going. Let the Right One In (Låt den rätte komma in, translated by Ebba Segerberg) was a bestseller in Sweden when it was published in 2004, and gained further international attention when the 2008 Swedish-language film adaptation (IMDB) won a number of awards and became a surprise hit. I’m not sure now if I heard about the movie or the book first, but unusually for me, I ended up watching the movie first, and read the book shortly after. I enjoyed both immensely, but for slightly different reasons in each case. Given that, I thought I’d do a combined film and book review. Please note that mild spoilers follow.

I’ll start off by saying that I personally liked the movie better, as out-of-character as that is to say. The book is a good work of fiction, but the movie is such a wonderful distillation of the most moving parts of the book that I found myself reading faster at points just to get to the parts that I most enjoyed in the movie. The movie is a dark romance with edges of weird, bleak horror, whereas the book is a horror story about alienation and despair, with a love story interwoven. Both are violent and strange, but the movie is intensely honed, whereas the book is lengthy and digressive, its horror at times baroque – and by that token, more conventional. The introduction of a lengthily played out police manhunt in the book also diffuses the dynamic between Oskar and Eli.

By contrast, the movie creates a sustained atmosphere of wordless, unexplained strangeness. For example, many of the details of Eli’s personal history are obscured in the movie,  so that it seems driven by intuition, not exposition. This approach was apparently off-putting to critics and viewers unfamiliar with vampire folklore, but I found myself comfortably at home.

The movie is also almost painfully beautiful visually, with minute, painterly attention paid to lighting and composition. The special effects are fresh and subtly employed, such that every scene in which Eli’s vampire powers are shown is a joy to watch – I particularly have the second-to-last scene in mind when I say this, but there are so many other memorable moments. In one dimly-lit basement scene, her eyes momentarily flash with a feral tapetum lucidum so subtle that my roommate and I had to rewind in order to make sure we had seen it at all. It’s too rare to see genre material treated with so much aesthetic appreciation. 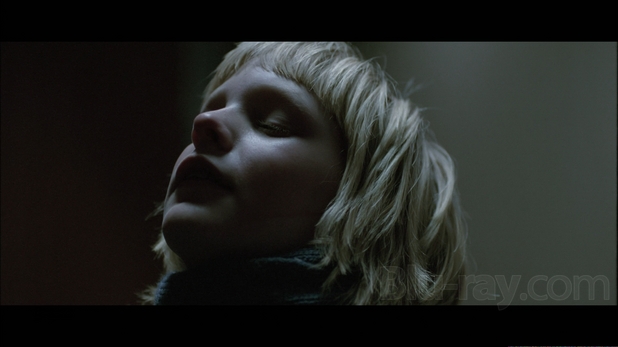 Overall, I think that the movie equals the novel in terms of capturing the characterization of its main players, Oskar and Eli – much has been said about the virtuosic performances of the 11-year-old actors, Kåre Hedebrant and Lina Leandersson, so I’ll restrain myself on that subject. Oskar in particular is a fascinatingly complex character, both vicious and compassionate, childish and precociously aware of his and others’ failings and motivations.

However, something that was lost in whittling the movie down was the novel’s exploration of the minor characters: a local drunk, his sometime girlfriend, Oskar’s drug-using teenaged friend, Oskar’s divorced parents. The book unfolds pictures of their dead-end lives with methodical attention to both the numbed routines of everyday life, and the occasional, illuminating moments of joy. Lindqvist’s pace and rhythm are hypnotic, and he effectively intercuts different characters’ perspectives to keep the narrative fresh. This (terribly Scandinavian) backdrop of muted desperation and thwarted hopes gives greater poignancy to Oskar and Eli’s relationship: to me, the novel was about a rare moment of harmony found in a world that dooms most of its inhabitants to failure. The precariousness of Oskar and Eli’s happiness is made clearer in the novel as well, as Oskar explicitly refuses Eli’s offer to make him into a vampire, making their relationship an inevitably temporary one. From the perspective of a vampire fiction fan, it’s also worth noting that the novel also offers some original and well-thought-out concepts of vampire “biology” that are elided in the film.

As a romantic and something of an aesthete, my ultimate preference is for the film, though I found the novel captivating and thoughtfully written, if more grueling. Overall, both are extremely moving, almost elegiac, but ending with a firm declaration of hope. I just have to say that I do not look forward to the upcoming Hollywood adaptation of the novel.