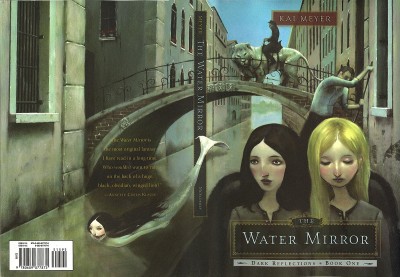 “In Venice, magic is not unusual. Merle is apprenticed to a magic mirror maker, and Serafin – a boy who was once a master thief – works for a weaver of magic cloth. Merle and Serafin are used to the mermaids who live in the canals of the city — beautiful creatures with hideous mouths that split their faces from ear to ear.

But Venice is under siege by the Egyptian Empire; its terrifying mummy warriors and flying sunbarks are waiting to strike. All that protects the Venetians is the Flowing Queen. Nobody knows who or what she is – only that her power flows through the canals and keeps the Egyptians at bay. When Merle and Serafin overhear a plot to capture the Flowing Queen, they are catapulted into desperate danger. They must do everything they can to rescue the Queen and save the city – even if it means getting help from the Ancient Traitor himself.”

Disappointing. I glommed onto this while bookshopping with Kakaner when I saw the cover art (by Jonathan Weiner), and couldn’t put it back on the shelf. This could have been a very nice dark-fantasy YA morsel – fast-paced, with a motley cast and an alternate Venice satisfyingly redolent of wartime paranoia and esoteric secrets whispered in clammy alleyways.

Unfortunately, the setting proved to be more interesting and memorable than the perfunctorily developed characters, and the prose is often awkwardly juvenile, e.g.,

“Merle appeared to be spellbound by the disgusting appearance of the fiery figure.”

Note that this is written from Merle’s perspective, so it makes no sense that she should “appear” to be spellbound. Of course it’s hard to say whether choices like these are original to the (German) text, or due to the translator, but there are also occasional outbreaks of ridiculousness that are more easily attributed to the translator, as when a mermaid’s skeleton is described as resembling a “supergigantic fish bone.” SUPERGIGANTIC. Boo, translator. This makes me curious about the editorial process for works in translation.

In any case, good brain candy if you’re one for intriguing world-building, but I didn’t find too much else of substance to enjoy. I’m still thinking about framing the cover art, though! That mermaid, boy o boy.