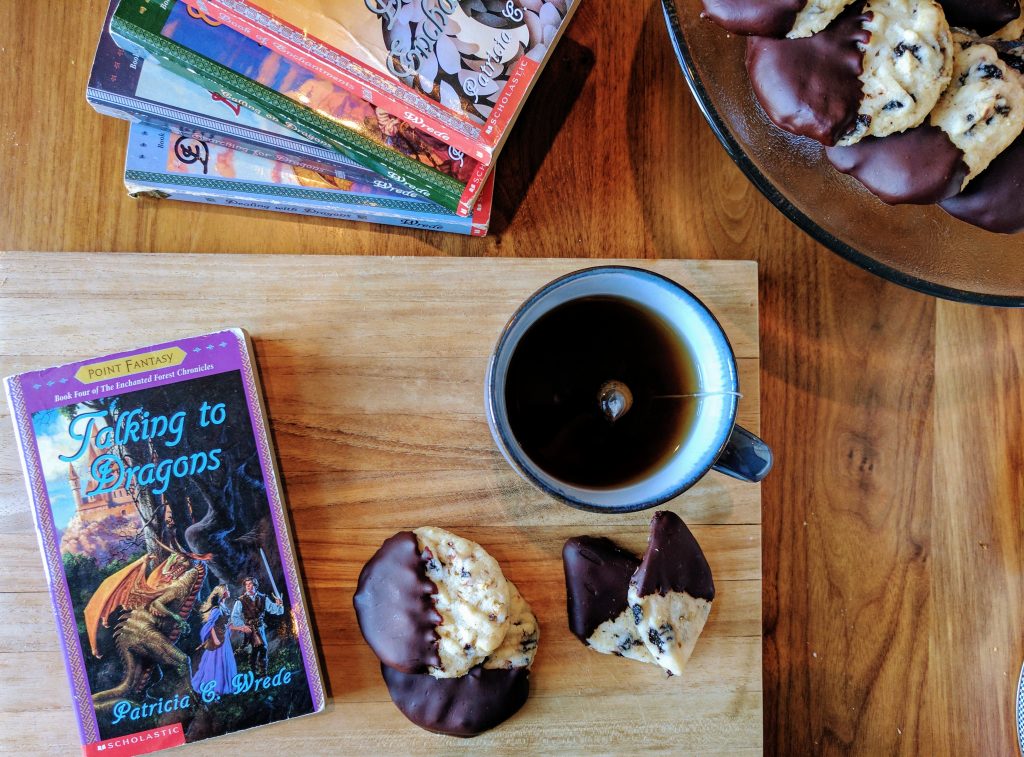 END_OF_DOCUMENT_TOKEN_TO_BE_REPLACED

As might have been suggested over the past couple months, I (and Kakaner too) was engaged in a full reread of Garth Nix’s Old Kingdom series in order to prepare for the arrival of Goldenhand, the latest book. Some thoughts , mostly high-level, somewhat scattered –

Of the Old Kingdom series, I think Sabriel is the most formally perfect – it’s effortlessly swift and lean; not a single page feels narratively wasted. (There’s an undeniable parallel there to Sabriel’s own character, whereas the later books stretch in proportion to their protagonists’ adolescent angst.) Sabriel also benefits from first-in-the-series effect, where the world, magic, and tone feel most fresh and mysterious. Sabriel is a tiny, dark explosion in my heart; I feel I could read it three times in a row in one week and not get tired of it.

The endlessly oncoming thunderstorm that is the final few chapters is still one of the most spectacular and atmospheric climaxes I’ve read. Though I still remembered much of it with almost paragraph-by-paragraph clarity, this reread still left me wide-eyed and prickling with goosebumps.

Out of context, this probably isn’t as striking, but I’ve always loved this bit of scene-setting when they’re struggling to recover Kerrigor’s coffin – darkness and the Dead are coming –

Sunshine poured down between the trees, rich and golden, but already losing its warmth, like a butter-coloured wine that was all taste and no potency.

Lirael is probably the fan favorite. When I saw Garth Nix speak last winter on the release tour for Goldenhand, he mentioned that he actually first wrote that book starting from the halfway point of its current form; his editor read it, and told him that he had to go back and tell more of Lirael’s younger years. Thank the Charter: Lirael without more Lirael is unimaginable. The book’s opening half is a paean to the sorrow of the out-of-place teenage woman. It was wrenching when I was that age, and I still think it’s sensitive, loving, and engrossing. It is also an unmissable exploration of one of my most most most favorite fictional settings, the Library of the Clayr, in which it makes perfect sense that all librarians ought to be steely women with swords, combat magic, and emergency clockwork mice.

I also really, really appreciate Sameth as the secondary protagonist (be it noted that in the Old Kingdom series, the male characters are always secondary), thanks to many years of struggling with a sense of myself as a useless person. Younger Emera found the women in the Old Kingdom almost deifically aspirational, and inspirational, while identifying with nervous, striving Sam. Thanks, Sam.

Abhorsen is a slog. Is grim slogging a formal prerequisite of books involving an approaching cataclysm? Arguable, but I think the book also suffers from a general shapelessness, in addition to generically motivated villains (though I enjoy the necromancer Hedge purely on the basis of picturesqueness – he looks a lot like Peter Cushing in my head) and (this is Kakaner’s biggest gripe) an overabundance of nearly deus-ex-machina-level magical solutions. Nevertheless, the ending still makes me cry like a baby.

I talked about Clariel here, and the novellas here.

Two novellas of the Old Kingdom

(Sorry for the disordered posting schedule lately; I lost my posting buffer, and only just got the time to make it back up again. Wednesday posts will resume next week.)

Clariel is the daughter of one of the most notable families in the Old Kingdom, with blood relations to the Abhorsen and, most important, to the King. She dreams of living a simple life, but discovers this is hard to achieve when a dangerous Free Magic creature is loose in the city, her parents want to marry her off to a killer, and there is a plot brewing against the old and withdrawn King Orrikan. When Clariel is drawn into the efforts to find and capture the creature, she finds hidden sorcery within herself, yet it is magic that carries great dangers. Can she rise above the temptation of power, escape the unwanted marriage, and save the King?

Clariel was a long-awaited prequel to Garth Nix’s Old Kingdom series, coming a long, long 11 years after the publication of the final book of the initial trilogy. In the intervening time, Nix had promised that he was working on telling the story of the mysterious Free Magic sorceress (i.e., villainess) Chlorr of the Mask, who was revealed to be a lost member of the Abhorsens, the family sworn to banishing the unquiet Dead.

When it first came out, Clariel was out at the library for so long that I actually forgot to follow up on it, until this fall’s release of sequel Goldenhand sent Kakaner and me into a joint catch-up tizzy (as previously mentioned in my feature on Clariel‘s cover case design).

The distinguishing flavor of the Old Kingdom books is darkness and desperation: Nix roots the reader deeply in the textures and difficulties of life in a kingdom that has long lost its royal family, where order and prosperity have been eaten away over centuries by the re-encroachment of chaotic Free Magic and greedy Dead. The series’ staunch heroines endure arduous journeys across a stark landscape, disturbing magic, and above all, uncertainty.

Clariel is a very different beast to the rest of the series. Though it’s seeded with darkness from the beginning, its first, city-bound act must be described as genteel – I thought of a cross between Tamora Pierce and Ella Enchanted. Wild-blooded Clariel, who wishes only to work as a solitary forest ranger, is thrust into the fussy conventions of city living, burdened with chattery finishing-school classmates, socially ambitious parents, and political intrigue. This means we have to deal with numerous chapters of her brooding, resenting, and not-very-compellingly longing for her forest refuge. (Normally Nix is very good at evoking place, but Clariel’s ruminations on her forest idyll feel too shallow and generic to give a real sense of what’s she’s lost.) And though the economic and political context is interesting – in the absence of an active king, city functions have largely been privatized by corrupt merchants’ guilds, which of course foreshadows the later threat of a monarchy completely dissolved – the snippy, rulebound urban world that all this entails simply isn’t as singular and gripping as the wider Old Kingdom.

But even if Clariel’s sulking and “I’m not like the other girls”-ing can’t quite escape the burden of being fantasy clichés, Nix does a lot of work towards making her character more specific, more interestingly difficult: she’s not quite a run-of-the-mill Angry Action Girl, as she’s eventually revealed to be a berserker, which even in-universe is stated to be unusual given her gender. On top of that, she’s explicitly asexual, which I think is the most directly I’ve ever seen that possibility addressed in a young adult novel. Finally, Nix’s examination of Clariel’s estranged relationships with her obsessive artist mother and weak-willed father lends a softer and often more genuinely sad nuance to her general misfit tragedy.