What’s that, you say? It’s Friday? Indeed it is, and for once I have something to show for it. Although it’s only sorta a Bad Book Cover Friday, as this June 1983 Magazine of Fantasy & Science Fiction cover isn’t astoundingly bad. 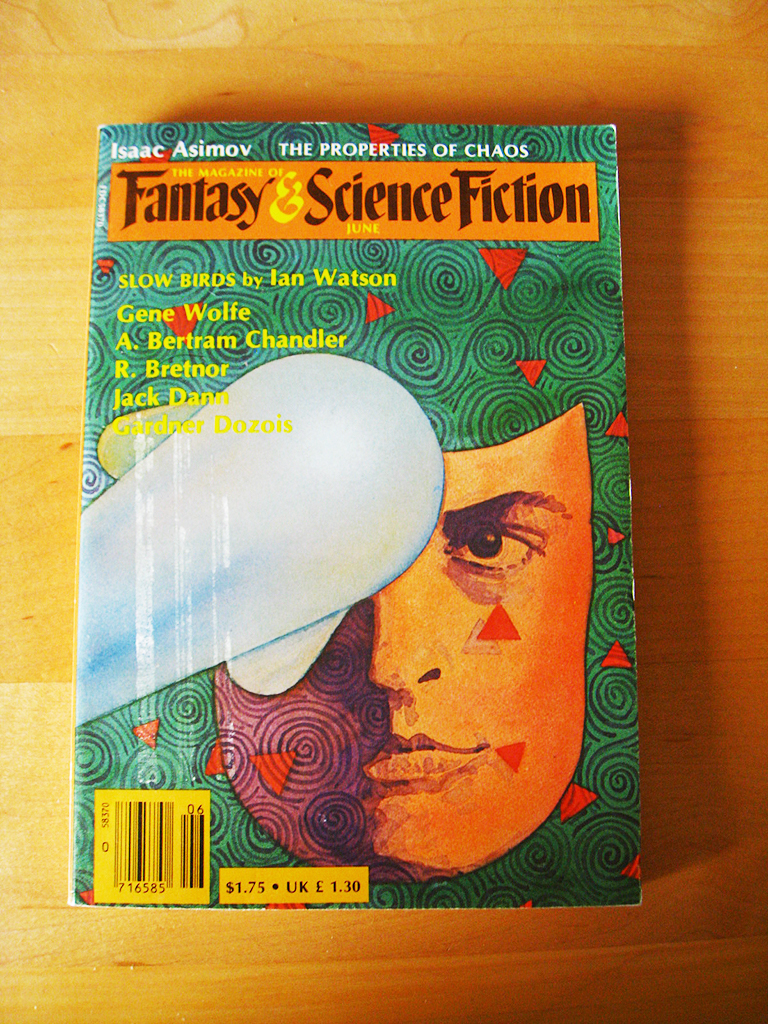 I mean, it’s bad, but it’s bad simply in that there’s nothing good about it. The mediocrity/absurdity/ignorance of color theory and anything else that would contribute to an aesthetic and/or compelling cover are so generally apparent that I have nothing specific to say about them.

The contents of the magazine’s advertisements, on the other hand…

END_OF_DOCUMENT_TOKEN_TO_BE_REPLACED

Quick skim after my interest was momentarily piqued by seeing the trailer for the upcoming movie adaptation. Alex Flinn‘s take on Beauty and the Beast casts Kyle Kingsbury, a New York prep-school prince with daddy issues, as the Beast. After playing a cruel prank on a (token subcultural) classmate, Kyle is horrified to discover that said classmate is, in fact, a witch, who proceeds to perform the requisite curse. Kyle is exiled by his father to an apartment in Brooklyn, where he sulks, is encouraged to read classics by his blind tutor, cultivates an interest in rose-gardening, obsesses over how he’s going to find someone to love him, and engages in mildly amusing repartee with a chatroom full of other modern-day fairy-tale characters. After an altercation with a drug addict, Kyle ends up welcoming into his mini-domain the addict’s daughter: one of his former classmates, a token scholarship student/girl named Lindy, who happens to like books and roses. You know where it goes from there.

For a book that’s supposed to be about learning not to rely on good looks and privilege, Beastly is distinctly concerned with, well – good looks and privilege. When Kyle first meets the witch, she’s described as an overweight Goth girl with a hooked nose and green hair. Luckily, when she reveals herself to Kyle as a witch, we learn that oh, actually, she has long eyelashes and a nice nose and a “hot” body. This is how we know she’s cool and powerful! And apart from his personality makeover, pretty much everything that Kyle accomplishes in the book (constructing a greenhouse and growing roses, buying a library’s worth of books for Lindy) is contingent on his still having access to his daddy’s credit card. Also, have a wise Latina (in the film version, magical negro) maid while you’re at it!

So yeah, I was not so much a fan, although I did find parts of Kyle’s voice and mannerisms surprisingly convincing, particularly his mixture of half-formed self-awareness and “buuut I couldn’t be bothered to give a crap about it” attitude, and some of his painfully telling remarks about his childhood perception of his father. The result is a character who balances depressingly realistic self-absorption and callousness with a believable eagerness to learn and do good.

I did appreciate Flinn’s obvious desire for readers to further investigate fairy tales and literature – the book is littered with references to other adaptations and parallel works, e.g. The Phantom of the Opera and The Hunchback of Notre Dame, and the afterword includes extensive recommendations for other fairy-tale retellings. If I could rewind, I might have read only the afterword, really, since I enjoyed her reflections on how she decided to approach the tale, particularly her observation that Beauty and the Beast can be read as two abandoned children united by circumstance. Nonetheless, I’m going to be incredibly predictable and recommend instead either of Robin McKinley’s retellings (Beauty or Rose Daughter; review of Beauty here) or, if you’re interested in the Beast’s perspective, Donna Jo Napoli’s Beast, whose historical and descriptive detail I remember enjoying.

Ugh. Father and son try to survive in a post-apocalyptic world that is apparently strewn with limbs, covered with ash, and– just in case we didn’t catch it the first 50 times on the first page– one that is repeatedly described as “bleak” and “gray”. The Road was highly unimaginative, riddled with stilted dialogue, contained no real character development, and lacked true substantive merit. Having never read Cormac McCarthy before (my only exposure being a viewing of No Country for Old Men), I was expecting an epic survival story in the ranks of Robert Kirkman’s The Walking Dead or something along the lines of Y: The Last Man. Nothing happens. The writing is wholly unspectacular, and the greatest annoyance was McCarthy’s inability to come up with new phrases to describe (in all fairness) a neverchanging landscape. Particular pet peeves were “smoothed his dirty/filthy hair”, “the landscape was dark/bleak/gray”, “there was ash everywhere”, and ending every. single. conversation with “Okay”. This next bit is mildly spoilerish, but for a novel all about the depravity of mankind once the restraints of society have been lifted, the ending is frustratingly inappropriate– almost a “deus ex machina” resolution. I will, however, grant that The Road was extremely cathartic in that I felt personally choked with raw suffering and despair after only 15 pages. But that alone was definitely not enough to save the book, and it was simply more of the same overbearing emotion for the next 150 pages. In conclusion, hype is a cruel thing and The Road was a waste of time.

Date read: 8.24.10
Book from: Borrowed from my cousin
Reviewer: Emera

So I assumed at first that this was in novel form, and was mildly intrigued since I’d never read a novel-length zombie survival story. (ETA: Oh wait, I have: Warm Bodies.) Turns out it’s actually in the format of interviews with various survivors of “World War Z:” soldiers, community leaders, doctors, lone survivalists, a feral child, etc., brought to you by the author of The Zombie Survival Guide. Most of it is schlock, especially any part of it that aspires to any emotional or philosophical depth and the so-called “satire,” which amounts to making very obvious fun of Corrupt Politicians, Shallow American Suburban Housewives, and so on. (Also, I must salute Brooks for his incredibly creative choices in making two of the three or four total Asian characters, respectively, a blind samurai zombie-whacker and a former otaku turned “warrior monk” (barf).)

But what fun schlock it is! The interview format gives Brooks an excuse to play out as many obsessively detailed scenarios as his zombie-nerd brain can churn out, from panics fueled by the failure of a fraudulent zombie-virus vaccine, to reappropriated medieval castles under siege, to all the intricacies of anti-zombie warfare and weapon design. (Possibly my favorite section: a long interview regarding the training of military dogs to track, and sometimes lure, zombies. It tickles the part of me that insisted on using attack dogs when playing Red Alert against my brother.) There are also numerous satisfyingly suspenseful episodes and creepy moments: the narrative of an American soldier who is ejected from a damaged plane and lost, alone, in a zombie-infested forest; the realization of a submarine crew that that odd sound is the clawing of dozens of submerged zombies that have surrounded their vessel. (Brooks’ zombies survive drowning, and can re-reanimate if thawed after being frozen, which leads to the fabulously grisly image of a world with its polar regions abandoned to hordes of half-frozen zombies.)

All in all, World War Z made for some great summer reading. I suppose it’s a little late to be reporting that, but there’s always room for a little brainless (pun?) entertainment. If you’ve ever discussed zombie outbreak contingency plans with friends, you’ll likely enjoy this.